This. This is where it’s at. I absolutely LOVE Barry’s bootcamp. Last week I attended the bootcamp in Euston, having heard great things about it from multiple people, including Maiken (@maikenf) who I attended it with. There are two bootcamps in London – one right by Euston station, and the other in east London, near Old street. The one in Euston is somewhat smaller than the one in Old Street, but leaves plenty of space for everyone to workout safely without fear of being whacked by their next door neighbour with their medicine ball.

Upon arrival at the bootcamp, I signed in, was told to sign a medical questionnaire and offered the chance to order a protein shake for after the session, which I did (blueberry cobbler FYI). I was then told that newbies would have an induction five minutes before the class started, to make sure we knew what was what. Still not entirely sure I knew what was what, at 12:30pm I took my place at bench 12 for the first round of floor. The workout was 1h in total, alternating between floor and treadmill work (although you can choose to stay on the floor for the full time – or treadmill if you’re mental….). The day I attended it was abs day, using 5kg+ medicine balls (I used 6kg which was tough for me) to do minute long exercises, each working abs in a slightly different way. The instructor (@hannahlouiseluck IG) flawlessly instructed both the treadmill and floor group, shouting out instructions to each, which certainly made me at least feel like I was in a personal training session, rather than a group of 30 people.

The floor exercises could easily be made easier or more difficult by using different weights – a minimum weight for men and women was given at the beginning of the class, allowing everyone to work as hard as was comfortable for them. The treadmill section had three levels, denoted by different speeds that Hannah would shout out at each change of speed. This allowed less fit people to decrease the speed in order not to have a heart attack, and those cardio bunnies to jack up the speed to get the most out of the workout. As a very competitive person, I loved the row of treadmills, where if was possible to look at how fast your next-door neighbour was going. This really pushed me to my limits, which was way faster than I would go in my own workouts.

After the class, Maiken and I went to get changed and shower in the small but beautiful changing rooms (but alas, no sauna). Before leaving we went to collect our pre-ordered smoothies from the smoothies counter (and of course took a bunch of photos).

Maike (@maikenf) and I post class, all sweaty with protein shakes in hand! 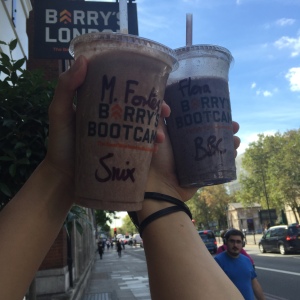 Almost worth the £5 they cost

One thought on “Barry’s Bootcamp”